The MoneyAware team read tons of thrifty and delicious recipes every day, and we try to practice what we preach, and cook them.

So when James recently had the bright idea that we attempt to make something yummy from some cheap cuts of meat, I jumped at the opportunity. I wish I hadn’t.

When I was assigned with cooking beef shin I really didn’t know what to expect. I should’ve known I was in trouble when I told the butcher I intended on roasting the beef shin rather than stew it. Why? Because he pulled this face at me.

Don’t try this at home. Really.

What would even cause my tragic lapse in judgment, you ask? Well, I’d been searching online for a pretty simple beef shin recipe, and I wasn’t having much luck. Thing is, if I have to factor in more than six or seven ingredients (including salt and pepper), everything usually goes to pot.

Also, I’m meant to be saving money, aren’t I? How am I meant to do that if I’m running about buying every random herb and spice known to man?

So when I found this easy-to-follow roasted shin beef recipe, I was over the moon. Easy-to-find ingredients with minimal faffing about? One of those ingredients being a large can of my favourite beer? Cheap, simple and low maintenance? This recipe was actually written for me, I was sure!

So, how did I manage to screw this up? Let me count the ways… 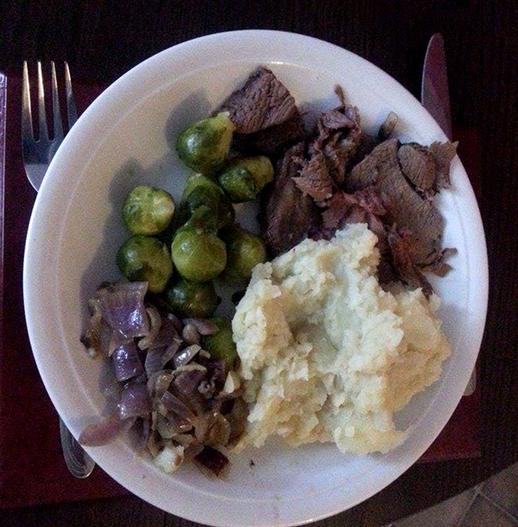 Look at this tragedy. It’s actually grey. It even tasted grey, if that’s even possible. There’s no filter on this photo. Why’s that? Because I wanted the world to know that there is such a thing as food that hates itself. In fact its self-loathing is surpassed only by its hatred of me, if the queasy stomach I suffered that night is anything to go by.

What I learned from my failed experiment

What can you take away from this? Three things really:

Not all of the MoneyAware team’s meat experiments led to failure though. Check out the full cheap cuts of meat article to find out how the rest of the team got on.

Posted by Rachel in Budgeting

Being a single parent is no bed of roses!

Being a single parent and trying to raise children on your own...

The top 5 debt and money news stories for February 2017

With gloomy January out of the way, we take a look at...

Beauty essentials on a budget

It’s easily done; you go to the chemist because your mascara has...