Overdraft debt: what to do if you’re constantly overdrawn

In 2016, we published research which shows that 2.1 million people were stuck being overdrawn for the whole year. Sound familiar? We should be able to help. [At the end of 2018, we’re seeing even more of our clients being stuck in this cycle]

Our research about overdrafts revealed that many people are constantly overdrawn, locked in a cycle of borrowing that’s hard to break free from. Overdrafts are meant to be dipped into occasionally to help with a short-term problem, but millions are relying on them to cover basic living costs.

But what can you do to try and get ‘back in the black’? How to get out of overdraft debt? We investigate four steps you can take to help.

4 steps to get out of overdraft debt

Making a list of your income and expenditure can have a seriously huge effect on your finances. You can’t be in control of your finances without understanding what you have coming in and where your money is going (we’ve got some great tips on getting started with creating a budget).

Once you’ve got a budget you’ll know what you need for your bills, living costs, and debt repayments. This should tell you if you’ve got enough money available every month to repay your overdraft. It can help you plan your spending so you’re less likely to be as overdrawn.

2. Talk to your bank

Many people are wary of contacting their bank to tell them they’re struggling, but there’s nothing to fear. The days of having to go and meet the bank manager and beg for mercy like a naughty school child are long gone.

Most banks will let you contact them however you prefer: phone, email, web chat, or in person. However you get in touch, you can explain that you’re worried about always being overdrawn and you’d like to reduce your overdraft. Ask them to help you.

The response you receive will depend on your bank, but if you’ve got a budget worked out then you’ll better understand what you can suggest as an affordable repayment. You could ask them to bring down your overdraft limit every month by an amount you can afford and then you’ll steadily clear the debt.

3. Separate your overdraft from your day-to-day banking

Trying to pay off an overdraft while you’re still using it every month is like trying to bail out a ship while it’s still taking on water. It’s much easier to repay an overdraft when you no longer use it to cover your living costs.

When you talk to your bank about dealing with your overdraft they may suggest a way you can separate your overdraft debt from your day-to-day banking, such as helping you open a new account with them. This will mean you can break the cycle of swinging in and out of your overdraft all the time. It makes it easier to keep your finances organised and to treat the overdraft like any other debt.

If your bank isn’t able to separate your overdraft debt from your main bank account then it may be worth opening a new bank account with no overdraft, that with a bank you’ve got no debts with. This new account can be used to pay in your income and manage your day-to-day money. Your old bank account remains overdrawn, but you can then treat it like a regular debt and it’s untangled from the rest of your finances.

You might be asking: “How will I cope if my new account doesn’t have an overdraft?” That’s where your budget comes in. If your budget covers everything you need to then it should

4. Start chipping away at your overdraft balance

This is the hardest bit. Making a plan is easy compared to sticking to it in the real world. This’ll involve following your budget carefully, and making your payments each month. It’s likely to be hard to begin with, but once you see your balance reducing it should help to keep you motivated.

Unexpected events might sometimes make it hard to stick to your spending plans, but a good budget will help you to prepare for most occurrences. That’s why it’s important to try to plan for every eventuality when making a budget.

What happens if I can’t pay my overdraft?

If you follow the above steps and find that you can’t afford to repay your overdraft by making monthly payments then you need expert debt advice. We can help with that. We’ll go through your budget, looking at all of your debts, and recommend the best option for sorting out your debts. Our advice is free and impartial.

Getting debt advice doesn’t wave a magic wand and make everything go away. But it can provide practical steps to get your finances back under control.

How do overdrafts affect your credit history?

Overdrafts are entered onto your credit file, just like most financial accounts. That means a record is kept of the balance you have outstanding on your overdraft and a history of your payments. While overdrafts don’t typically have regular payments set, the record will show the account is OK if you’ve kept it in good order and within your limit.

If you go over your arranged overdraft limit, your bank will report this to your credit file. A prolonged period of being in an unarranged overdraft could lead to the bank defaulting your account, which will be recorded on your file for six years.

Can you get an overdraft with a bad credit file?

Banks will usually check your credit history when you ask for an overdraft, and negative information on your file could lead to them refusing your application or only allowing a small overdraft facility.

If you’ve been with your bank for a while they’re also likely to consider how you’ve handled your account over the longer term, so that could count in your favour if your account history shows you’re careful with your money.

Can I get my bank to refund overdraft charges?

If you feel like your bank has applied unfair charges to your account you can ask for them to be refunded. If asking for a refund doesn’t work you could make a complaint to the bank. They’ll investigate and respond within eight weeks, though it’s usually much quicker than that.

If you make a complaint about charges and the bank won’t refund them you could ask the Financial Ombudsman Service to investigate your case.

Should I increase my overdraft?

Extending your overdraft may seem like a solution to a problem, but it’s only a good idea if you have a realistic plan to repay the overdraft and get back into credit. Our research has shown that many people get stuck in a constant cycle of going overdrawn, so it’s a dangerous game to play.

If you’re finding it hard to stay within your limit then it could be a sign that you need debt advice.

How long does an overdraft take to repay?

How long is a piece of string? This might not be a helpful answer but it highlights one of the most common problems people have with overdrafts. There isn’t usually a set payment for overdrafts, because as long as you pay the interest and any fees then there isn’t a specific amount you have to repay.

You might find that your overdraft is cleared every month when your income goes in, but if you run it back up again to cover your day-to-day spending you’ve not really cleared it. It takes organisation and discipline to clear an overdraft debt, following the four steps above. 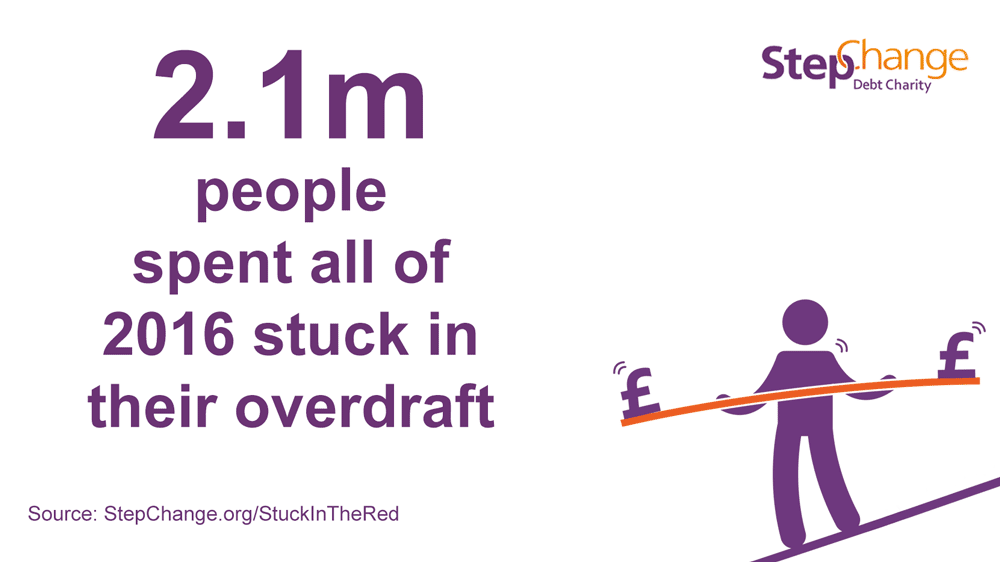 Posted by James in Budgeting, Living with debt

Worried you might be falling into ‘The Debt Trap’?

Our latest report, carried out alongside The Children’s Society, reveals that two...

Slashing the cost of Halloween

From home-made decorations to live-action Cluedo, check out these handy tips that'll...