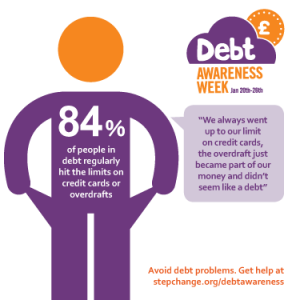 As part of Debt Awareness Week we’re discussing the five danger signs to help you avoid them, or if you’ve tried to deal with your finances in this way, how to get help sooner.

First up, a bona fide danger sign of debt is coming too close to your credit limit on a regular basis.

With living costs steadily rising over the years, it’s become commonplace for many people to fall back on their credit cards or overdraft to make ends meet, using the money on such a regular basis that it ends up not seeming like a debt at all.

Credit limits – why is it a problem?

We recently carried out a survey asking our clients how they were trying to cope before they realised they had a debt problem. We weren’t surprised that the vast majority had relied on credit too much. In fact, 84% of respondents said that they regularly went up to or over their credit limit on credit cards or overdrafts before they got debt help.

“My bank account was constantly at its overdraft limit. I’d use credit card balance transfers to top this up until I reached the limit, then I’d ask for the limit to be increased and 9 times out of 10 it would be. Online card services made it easier as I didn’t even have to speak to someone to arrange it.”

“We always went up to our limit on credit cards, and the overdraft just become part of our money and didn’t seem like a debt.”

“I took advantage of credit limit increases to pay minimum balances of the other cards, creating a ‘rob Peter to pay Paul’ scenario.”

Being near your credit limit on your cards or overdraft too often indicates that you’re probably living beyond your means. And when it comes to overdrafts, it’s important to remember that your bank can withdraw the facility at any time, and may do so if they feel you’re relying on it too much.

I’m close to my credit limit – what can I do?

Stop using credit! It might be stating the obvious but the only way you can get those cards or the overdraft under control is by no longer relying on them. Cut the cards up to prevent the temptation to whip them out at the checkout. If you’ve got a large overdraft open a basic bank account with another bank so you can protect your money.

Of course that could leave you without much cash until payday. Look at your budget to see where you can free up some extra cash to help you survive until you’re next paid. Living by a budget is the best way to keep your finances in check and while it might mean a difficult few weeks while waiting for payday, it’s better than the alternative.

Pay more than the minimum amount if you can: Many people have difficulty paying more than the minimum payment on their card balances each month. Due to the relatively high interest rates and the low minimum payment level, repaying in this way can keep you in debt for decades! Make sure you up your payment to something that’s manageable but pays off the debt quicker. The same goes for your overdraft.

Try not to miss payments or go over your limit: Penalty fees could be added to your balance if you do. If you can’t make a payment contact your lender as soon as possible to let them know. But don’t forego your living costs such as rent or council tax to pay a credit debt (yet another of the five debt danger signs), as this can lead to more serious problems in the future.

Consider a balance transfer: Credit card providers sometimes offer low introductory interest rates or special deals when you transfer a balance from one card to another. This might also mean you end up paying less. However it’s vital to look at the details and make sure you won’t be paying more than you need to once the offer expires, as this could actually make your debt worse.

If you can’t financially survive without credit cards or your overdraft, you need debt advice.

Visit Debt Awareness Week and see how many of the five debt danger signs you’ve passed, how to avoid the others, and how we can help with free and impartial debt advice.

How do I get out of payday loan debt? Find out in 5 steps

We know being in payday loan debt can be scary. If the...

Bankruptcy: The differences between bankruptcy and an IVA

Bankruptcy and an individual voluntary arrangement (IVA) are both forms of insolvency....

Payday loan debt: why your household bills could suffer

Payday loan, catalogue and doorstep lender debt can quickly get out of...