Black Friday – Waste of time or useful way to save cash?

Black Friday has a bad reputation for scuffles and unpleasantness, but it’s meant to be an annual shopping event to help people “save money”. It’s something UK retailers have imported from America, falling on the Friday after the Thanksgiving holiday in the US. But what we want to know is this: Is it worthwhile?

Like other American exports, such as David Hasselhoff, Halloween and going to see “movies” instead of “films”, Black Friday has had a mixed reaction as it’s crept into our national consciousness.

We’re divided in the MoneyAware team – Rory argues against it and James makes the case in favour.

But do you think it’s a waste of time or a good way to save money? Add your thoughts to the comments section once you’ve read the article…

Rory’s opinion: “Black Friday is a waste of time”

Having one day of the year where you drop your prices doesn’t make any sense. It just creates a jumble sale atmosphere in the shops and rewards people with pointy elbows that don’t mind throwing their weight around.

Why can’t shops just run the sales for a bit longer? Then there doesn’t need to be all those news reports of people scrapping over a flat screen TV that they probably don’t need anyway. I sometimes wonder if they do it on purpose to get into the news.

The other thing that annoys me about Black Friday is that a lot of the deals aren’t all that good anyway. On the sign it will say that they’ve knocked £200 off a computer, but it won’t tell you that it’s an old model that’s been replaced by something better. Shops use it as an excuse to clear out all the stuff they can’t get rid of at full price.

I love a bargain as much as the next person, but I really don’t want to have to push through a crowd of people to save money. You’re better doing some research online and trying to find a genuinely good deal, rather than just throwing yourself into a mob of bargain-hunters.

James’ opinion: “Black Friday can be useful if you’re canny about it”

Black Friday shopping doesn’t have to mean waiting in queues in the freezing cold for midnight openings and shoving to get to the front. In fact, most of the best Black Friday deals can be found online, meaning you don’t have to leave the comfort of your own home.

Rory might have a point when he says that a lot of Black Friday deals are just shops looking to sell off their old stock, but that’s not always the case. I’ve spoken to quite a few people that saved a lot of money on things that they were going to buy at full price anyway.

It’s best to avoid getting caught up in the hysteria of this sort of an event and just keep an eye out for offers that are genuinely useful. If there’s something you know you’re going to buy and you’ve got the money available to pay for it, then Black Friday could be a great opportunity to get a discount.

The Money Advice Service have 5 top tips for Black Friday if you can afford to buy something on the day. The full article is worth a read, but here’s a quick summary:

If we could sum up the sentiment of this blogpost into one sentence it would be: 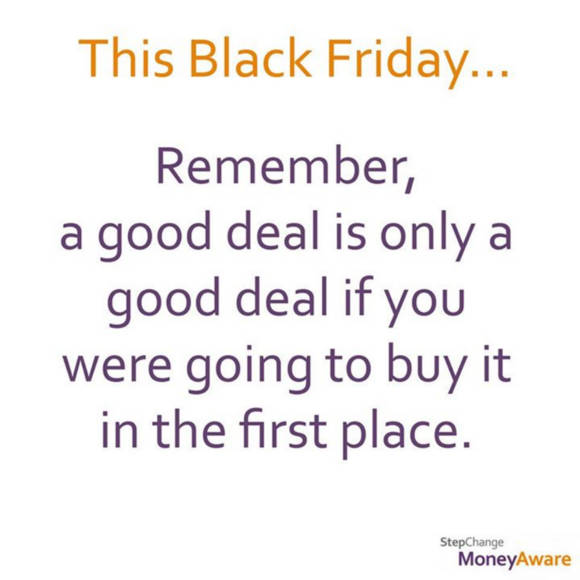 Posted by James in Saving money

The Financial Conduct Authority believe that at least 15 firms are offering...

How to prepare for your IVA annual review

Each year your IVA payment is subject to review, in line with...