12 recipes everyone should know how to cook

I have a friend that often tells me he can’t cook. The way I see it, if you can read you can cook. The instructions are right there in the recipe!

There will be times when things go wrong. Pasta will boil dry. The base of your pizza will singe to a crisp because you thought it’d be OK to just put it on the bottom of the oven (ahem).

But aside from the odd mishap there’s nothing better than a home-cooked meal so it’s good to learn a few go-to recipes. Here’s 12 classic recipes from around the web that we should all know how to cook.

Whip up an omelette 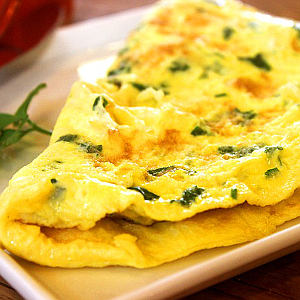 Everything I look for in an omelette

Eggs are not my forte. Poached egg? No idea how you do that. Even frying an egg makes me nervous as it always sticks. But eggs are a great option for dinner because they’re so quick to cook. Add some vegetables to an omelette and you’ve got yourself a meal.

Here’s an easy omelette recipe to get you started. A few suggestions for things you can add include onions, tomatoes, mushrooms and ham. Mix it up. Go mad, add everything.

Oh and don’t forget that adding a tiny bit of baking soda to your omelette can make it extra fluffy. 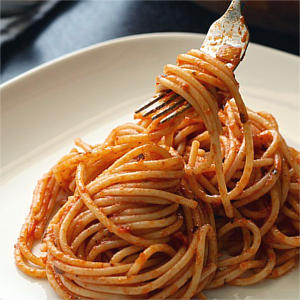 I’m not a fan of this usually but it looks delicious.

I won’t lie. I’m not a fan of tomato pasta sauce. My mother, as an Italian and perfect-er of said sauce, will never know.

But this isn’t about me. This is about you.

So, here’s a simple recipe for those days when pasta and tomato sauce is what you crave most. Only seven ingredients are involved and although that sounds like a lot, some of them are just things like olive oil, chopped tomatoes and garlic. Basically chuck it all in a pan and wait for your tomato pasta sauce dreams to come true.

If pasta bake is more your kind of thing, then you can follow the same process and then pop it in the oven. Here’s a tomato pasta bake recipe that’s similar to the above sauce, so you can get an idea of cooking times.

Yep. Could eat that right about now.

I like chilli because you can customise it. Add sour cream, guacamole, salsa and some tortilla chips. Have it with rice, garlic bread, tortilla wraps, or baked potato. The options are endless.

It’s easy to do and if you’ve got spices in your cupboard, you’ve probably already got the basics to make chilli seasoning. The good thing is you can control what goes in, so if you’re not a fan of something just skip it. It’s all good.

Here are some chilli seasoning basics:

Here’s an easy chilli recipe to follow (including seasoning). If you want it to be meat-free, you can swap the meat for vegetables like sweet potato, peppers, courgette and add extra beans or lentils.

If you’ve never had a tray of roast vegetables for dinner you’re missing out. My mum made a tray bake using chicken, chorizo and vegetables when I was visiting home and I was sceptical at first but it was very tasty.

To make it she:

It’s healthy and a good way to use up vegetables. Here’s a guide to roasting vegetables, so you can mix it up and have whatever takes your fancy. When I made this the other day I used, sweet potato, onion, tomatoes, garlic and carrot with olive oil and apple cider vinegar. So tasty!

Stew is very hearty, especially when you add dumplings or crusty bread. The good thing about stew is you can use cheap root vegetables. Some supermarkets even do a stew pack for about £1, as James wrote about in our frugal recipes post.

To make stew you chop everything into chunks, add some stock and put it in a pot to cook. Simple! Here’s a beef stew recipe.

Need the dumplings? I feel you. Here’s a more complex stew recipe AND a recipe for dumplings. 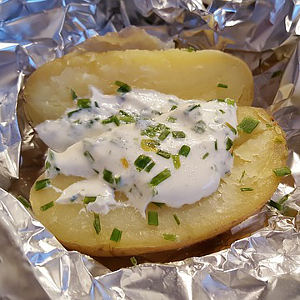 These food pictures are making me hungry.

Baked potatoes are easy to make and you can have anything with them. Here’s a guide to making the ultimate baked potato.

If you don’t have time to pop one in the oven for an hour or so, microwave it first and then finish it off in the oven so you still get the nice crispy skin.

Before you pop it in the oven, spike it with a fork, drizzle with olive oil and add a sprinkling of salt.

I like to make a criss-cross on the top in the centre too, I’m not sure why. I just like seeing the skin go all crispy.

Serve it with some butter and as for toppings, use whatever you want:

When this recipe declared itself as ‘best-ever mac n cheese’, it was not lying. I once found myself in a constant loop of making it or craving it because it was so tasty. It uses vegetarian cheddar but I just use the normal stuff.

The best thing about this recipe is the bread on the top. It takes it up a notch to a carb on carb level. If you’ve got a baguette lying around then definitely break it up and add it to the top of the dish while cooking. Or you could use crunched up ready salted crisps as an alternative. A perfect comfort food! 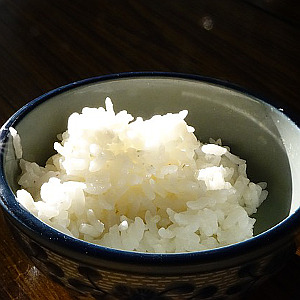 Less tempting. Although it does look like good rice.

I know. I know that rice isn’t a meal by itself. However, it’s a great side dish to many meals – provided you don’t cook it into a disgusting gloop. So it’s good to know how to cook it. Jamie Oliver has a video guide to making the perfect rice. Perfect it and go forth and add it to your meals.

The good news is, once you’ve perfected rice you can whip up any left over vegetables and meat into a fried rice dish. Here’s an egg fried rice recipe to get you started.

Stir fry is quick and healthy. You can use:

Here’s a stir fry recipe that includes a simple sauce too.

Here’s a little tip. When I make stir fry with rice I:

If you like ginger, consider buying a small fresh piece, grating it up and adding it during the cooking process. 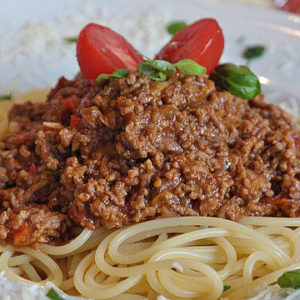 Why did I do this to myself? It’s not even lunch time yet.

Truth is you can make a simple Bolognese with a few basic ingredients and it’ll still be edible.

Here’s one of the more simple Bolognese recipes I could find online.

The good thing about learning how to make a simple Bolognese sauce is that you’re already halfway to making a lasagne. All you need now is the white sauce and pasta sheets.

If we’re going for the proper name, it’s béchamel sauce. I’ve only made it once when I decided to cook a walnut lasagne (don’t ask) and I have to say it was very simple and much better than the usual pre-made stuff I get.

You only need butter, milk and flour. Here’s a video guide to making simple béchamel sauce.

I make the red sauce first (Bolognese), then the white sauce, so the red has longer to cook. Then, in a lasagne dish, add a layer of red sauce, pasta sheets, white sauce and repeat.

Here’s a basic lasagne recipe. It recommends you use a stock cube and wine but again, I don’t think this is necessary. And yes you could make one of the more complex Bolognese sauce recipes however if you want something cheap and simple the one above will work just fine. 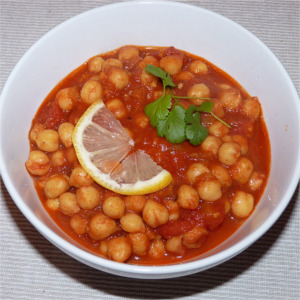 Definitely going to have a snack now.

My flatmate made chickpea curry to use up some bulky canned ingredients we had. It sounded so simple I doubted it. I was wrong. It was basically chickpea and chopped tomatoes with spices but it was so tasty!

I’ve scoured the web and found a similar recipe and found this easy chickpea curry. It’s a great store cupboard recipe that’s healthy and simple. Of course, if you want to bulk it out you can add meat or other vegetables.

There you have it. 12 simple recipes to make from scratch. Not knowing how to cook is no longer an excuse. There were times at university when I thought it was acceptable to have a yorkshire pudding and gravy for dinner. Now that I can cook, those days are no more. OK, well sometimes I’m still guilty of doing that but what can I say? It’s delicious.

Anyway, the good thing about a lot of these recipes is that you can bulk make them and freeze any leftovers. If you’re going to do that, here’s a guide to freezing food with tips on how to defrost too.

Do you have any simple recipes to share? Let us know in the comments below.

Posted by Jenny in Budgeting

When you’re in debt you live in fear of a visit from...

It’s been over a month since the Brexit vote, and we’ve been busy...

Where did you learn how to manage money?

For something the plays such a big part in our lives, it’s...