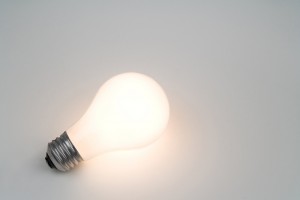 When was your lightbulb moment?

When people realise that they can’t handle their money worries any longer and ask us for debt advice it’s often called “the lightbulb moment”. On Monday we celebrate this first and hardest step towards becoming debt free.

For many people who call us this moment is the first time they’ve opened up about their financial problems. The StepChange Helpline advisor is a voice of reason, trying to discover what the problem is and how to resolve it.

The decision to seek this help is the lightbulb moment. It’s a realisation that your debt is not going to get better on its own, no matter what you do. It’s the point of no return.

On Monday we’ll be answering the question: where are people having this lightbulb moment about their debt right now?

How are we going to answer this? As we did last January, we’re going to report on the number of Helpline calls we’ve received and the total debt reported. But this time we’ll be doing it in a slightly different way.

Between 9am and 9pm on Monday we’ll be updating a (near) real-time UK debt map, using Google Maps, showing the number of callers and the total debt per postcode district. This map will show the people who have made the first step that hour and that day and the debt they’re weighed down under.

We’ll also be asking our clients to relate their own stories on Facebook and Twitter (using the hashtag #lightbulbmoment). We hope this’ll encourage more people, distressed under the pain of their debt, to have their own lightbulb moment and call StepChange Debt Charity.

As one of our ex-clients described it recently:

We had hit a glass ceiling with a bump and didn’t really know what to do next. The bank had called me in to “help” me with my finances.

They literally walked out on me when they realised they couldn’t sell me anything even though they had called the meeting. That was it.

Join us on Twitter, Facebook and this blog on Monday at 9am as we celebrate the first moment you take some real action towards becoming debt free.

Posted by StepChange MoneyAware in Living with debt

How to deal with nuisance calls and texts

From forgetting to tick the privacy box on an online form to...

We were using the cards to pay for groceries, petrol and the...

10 ways to make extra money to pay off debt

The quickest way to pay off debt is to cut your costs...