Can you run away from your debts? 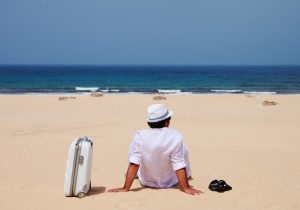 You might know a bloke with skin like a leather handbag who boasts that he did a midnight flit to Spain to escape his debts. He’s returned to Blighty with an apparently clean credit report.

This isn’t a one-off: we’ve read quite a few stories on the web about people who’ve jetted to the four corners of the world to escape their creditors. They’ve wait six years to return, buoyed that their debt has been written off and the banks can’t pursue them. They’re the kind of person that don’t come to us for debt advice.

So, can you just do a bunk to Iberia, sit on a beach for the better part of a decade and end up owing nothing?

Of course, the reality of the situation is slightly different.

There’s a piece of legislation called the Limitations Act. One of main aspects of this act is that a debt can become “statute barred” after a period of six years.

What does that mean? It means that creditors are unable to legally pursue you for a debt if, after six years:

This is the only piece of debt law that could see your debt deemed unenforceable. However some try to use this to intentionally avoid paying their debts.

So, could you ignore the creditors and not pay them anything for six years?

Despite the myths that have grown around the Limitations Act this tactic wouldn’t actually work.

As the above explanation suggests, if you start to ignore your creditors they’re liable to get in touch with you quite quickly! They may even do this through the courts, by obtaining a county court judgment (CCJ), or another one of the debt collection procedures available to them.

Could you move house and not tell them?

That wouldn’t work either as it’s your responsibility to keep your creditors updated with your current address. Moving house and not telling your creditors where you’ve gone is seen as debt avoidance. This is never recommended.

The Limitations Act isn’t there to encourage avoidance or non-payment and most judges would take a dim view of these tactics. The act is there to protect people from being forced to pay debts that have ‘timed out’ through no fault of their own. It protects us all from being chased for very old debts that we weren’t aware of.

However, it’s important to realise that these laws cannot be twisted to help you get away without paying your debts. The money owed is not written off; it’s still a debt and still exists, but the creditor can no longer enforce the debt and take you to court.

We find our clients are genuine in wanting to do their best to repay as much as they can afford to their creditors. In turn we want to do our best to give them the correct advice and guide them through the maze of legislation while being impartial and honest at all times.

In essence we’re here to help the ‘can’t pays’ rather than the ‘won’t pays’.

If you’re desperate enough to start looking for ways to escape your unmanageable debt you might want to use on online debt help tool like Debt Remedy to find a solution to your problem quickly.

If you’re thinking of taking a six-year Spanish siesta to escape your debt nightmare think again. It would probably be quicker to be honest and just pay off the debt.

Posted by Peer in Living with debt

Can I afford to send my kids to uni? University costs for parents

Everyone wants the best for their kids, but it’s not always possible...

Clone firms: why would a company pretend to be a debt advice charity?

If you go online to look for debt advice, you should feel...

There’s been some troubling news this month with devious happenings coming to...