If you need help with your debt problems visit the debt advice section of the StepChange Debt Charity website. 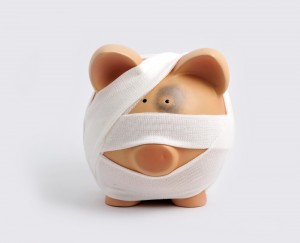 My partner and I had accumulated debt over our adult lives mainly due to poor financial management and the lure of ever available credit.

Access to that pot of credit meant that we never really questioned our spending. If we wanted something, or were running short of money, we’d just use one of the cards.

This pattern went on for years and years and when I was made redundant and the small redundancy payment was spent we relied on our learned behaviour of using overdrafts and credit cards, extending the credit further on each of them.

We were using the cards to pay for groceries, petrol and the withdraw cash to pay the monthly credit card bills. This continued for a year, until the credit ran out.

The stress of debt

This situation caused high levels of stress that was really destructive; I felt utterly useless and my partner was frustrated and angry that he couldn’t just ‘solve’ the problem. There were so many disturbed nights, panic attacks and I spent much of my time alone, in tears and scared.

We hadn’t missed any of our payments but we both knew the final month in which there was credit to rob Peter to pay Paul was rapidly approaching. I was sick with worry – I couldn’t begin to imagine how we’d tell our teenage son or our friends about our shameful situation. It felt like a dirty, shocking secret.

One day we locked the front door and gathered up all our bank statements.

I opened up a spreadsheet on the computer and started entering the monthly payments and the total debt owed. We had thought we owed about £20,000, as I typed in the numbers it became clear that we were way off in our estimations – the actual amount was £43,000 and it was owed to 20 creditors.

It felt like the floor dropped away that day. For two days afterwards we didn’t sleep or speak about it. We were both genuinely in shock and sickened, and shut each other out.

We thought we were days away from having the house emptied by scary people; I decided I needed some facts about courts and bailiffs. I went to several websites and landed up on MoneySavingExpert.

I read that I might be able to try to negotiate with creditors, and although the thought made me terrified, I got myself a MoneySavingExpert forum log-in and asked the StepChange debt advisors (resident within the forum) how to negotiate when you’ve got so little to offer.

Being able to seek advice anonymously was really helpful and the advice I got back from one of the StepChange advisors signposted me to Debt Remedy. It was awful confronting to the reality of the situation but, at least we were facing up it instead of hoping it would just disappear one day.

As a result, we learned about debt management plans (DMPs); we’d never heard of these and it took a little bit of reading around to understand that they are not the same as bankruptcy and that, with the help of a debt charity, they could help us manage our situation.

Facing up to the fact that we’d got in so much debt that it could take well over a decade to clear was absolutely shocking, however the DMP gave us some structure and purpose to dealing with our debt. Until we embarked upon this path, the debt was quite unknown, unmanageable and had, we felt, the potential to absolutely destroy our lives.

Starting on the DMP, we filled in the ‘financial stuff’ online, chatted with one of the StepChange advisors on the phone, and were amazed – literally amazed – to find that they were friendly, non-judgmental and offered straightforward advice.

We got a pack of paperwork through from StepChange Debt Charity within a couple of days, photocopied our statements at the local Co-op, signed our agreement and returned it.

Act on the advice

We did as advised by StepChange Debt Charity and set up a new basic bank account (as our old current account had an overdraft and so became part of the DMP), set up necessary direct debits in the new account (electric, rent, water etc) and we sent off a letter to each creditor explaining what was happening and included a £1 postal order token payment.

At this stage, we did several things which helped in the next couple of months:

Being able to carry out some actions and talking about it to each other in terms of “this is what we need to do” instead of “what in the world are we going to do?” helped enormously and made the situation much more manageable and less frightening. Our debt payments, via the DMP, had reduced from nearly £900 per month to £198.

We then waited for the chaos to ensue…

Read part 2 of the story here

Posted by sickasachip13 in Budgeting

﻿Over 65 and have a partner? Check your benefit entitlement now

Starting from May 2019, changes to benefits for people aged over 65...

Love and money are alike; they’re both a combustible mix. The devastation...

Debt collectors are not bailiffs

Creditors can send, or threaten to send, doorstep collectors but it’s really...