This month’s challenge is to buy a Secret Santa gift for a colleague for exactly £3.21. Why £3.21? Because we like to make life difficult for ourselves! Also, by setting a strict price limit it means you have to put that little bit more effort and thought into your gift buying.

‘Secret Santa’, if you’re not familiar with the concept, is where everyone picks a name out of a hat and has to buy a gift for the person they picked. It’s a good way to reduce present buying, as you only have to buy one gift, rather than getting something for everyone.

Feel free to use this article for inspiration if you’re doing a Secret Santa yourself this year. Just don’t hold us responsible if your gift choices make you unpopular!

I got Peer’s name out of the hat in our MoneyAware ‘Secret Santa’ and my first thought was, “uh oh, I’m buying for the boss”! Peer’s a keen reader so I wanted to get him a book, but after a quick browse online I realised there wouldn’t be much of my budget left if I had to factor in postage and packaging too!

Instead I popped to a discount bookshop near to where I live. It tends to be a bit hit and miss in there, but this time I found something I thought would make an ideal present for him.

The book I bought’s called ‘The Inn at the Top’, which is about the tales of a young couple who moved to the Yorkshire Dales to run the highest pub in Britain. Peer’s a landlady’s son, an avid walker (he claims to have climbed every mountain in the Lake District) and has actually visited the pub in question, so I thought the book might be up his street.

The book cost £3, which left me the problem of finding something for 21p! I was in the pound shop and saw a box of candy canes. I worked out they were around 7p each so I wrapped three up. I’m pretty pleased that the cost of his pressie came in right on budget!

(Need more tips for Christmas? Read our article 10 ways to have an old-fashioned Christmas on a budget.) 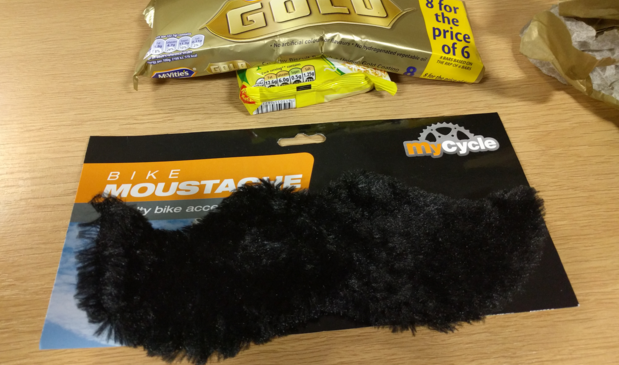 I figured that Rory might like a scratch card as part of his Secret Santa bundle. I for one like receiving scratch cards because even though the chances of winning big are next to impossible (as we’ve said before in “What happens if I win the lottery while I’m in debt?‘), I can dream for five seconds. Plus, if Rory wins then perhaps he’ll share his good fortune with me…

Next I ventured into the pound shop with Rory’s favourite chocolate bars in mind: Gold Bars. Luckily, they were in stock. So that’s Rory’s healthy eating ruined and he’s sorted on Gold Bars for at least a day, given the rate I’ve heard he gets through them.

I decided to scope out another gift in the bike section. I know Rory has a bike because, well, I work with him. I thought a puncture repair kit would be useful, and sure enough one was glaring at me from the shelf. But then something else caught my eye. Something less like a repair kit and more like a giant moustache. For some reason the pound shop had invested in ‘bike moustaches’. They’re entirely useless but I thought the next time Rory nearly runs me over on his bike at least I’ll get a laugh out of it.

I had 21p left to spend. For some reason, noodles caught my eye. Probably because instant noodles are delicious and there was a multipack of five for £1. I thought if I like noodles so much, maybe Rory likes them too? So that’s what I bought. It’ll be awkward when Rory opens his gift to reveal a packet of instant noodles but that’s all part of the fun, right?

Some would say that I cheated. I think that I bent the rules. Twice.

Firstly, I’ve got an annual membership with free next-day delivery with a very well-known online retailer (cost: £79 per year), so rather than walking to the shops through the wind and rain searching for presents I went on my phone, fired up the app and typed “cats” into the search box.

I had Rachel in the Secret Santa, and if there’s one thing she likes it’s cats (well, she likes Game of Thrones as well, but I don’t have a clue about that sword and sorcery stuff). So when a cats colouring book to help mindfulness came up (for £2.99), I thought it was perfect. After all, it was Rachel who put together our Debt and Mindfulness website guide this year. And she likes cats.

You can’t have a colouring book without colour pencils, but with only 22p left to play with this is where cheat two came into place. The cheapest pencils I could find were 66p for three sets of seven. So by my logic, if I ordered those and only gave her seven, that was 22p. So Rachel got one set, and I’ll keep the other two sets for other presents.

I argue that I came in on target (OK, if you consider the full price of the membership and the extra pencils I’ve actually spent £82.56 on a colouring book and 21 pencils), but Rachel seemed to like the present. The colouring book was surprisingly weighty and good quality.

Was it easy to get a Secret Santa present for £3.21? Yes, but you need to know the person you’re buying for, and you’ve got to cut corners where possible. But not cheat, oh no.

Jenny is a big fan of arts and crafts. She’s always sharing her impressive pieces of work on Facebook and Instagram, so she should be easy to buy for, right?

Sticking to my £3.21 budget was a challenge. I decided to stay with the arts and crafts theme and bought Jenny a pencil set, 2016 diary, a set of two Christmas candles (to get her into the festive mood) and some vinegar. Yes, that’s right, I bought her vinegar.

I wanted to buy white vinegar, as white vinegar has loads of uses as a household cleaner. But with just 21p left to spend, and white vinegar costing 34p, I had no choice left but to buy brown vinegar. At least she’ll be able to flavour her chips for the coming year.

(The vinegar story sounds very believable, but in reality I wandered the local supermarket desperately seeking something costing just 21p and this was all I could find.)

I was off to a good start with my secret Santa gift for James. Only the other day we had been discussing how secretly chuffed we were that ‘adult colouring books’ were an actual thing. I was the last to complete the Secret Santa challenge as I was on holiday, so I had to act quickly (in other words whatever I could grab on my lunch hour).

We’re fortunate in that our office is a short walk away from a shopping centre, where a not-too-famous but brilliantly stocked art supply chain can be found. There I found an array of adult colouring books that are meant to foster inner calm and mindfulness. £3 bought me this lovely nature colouring book, and there were lots of designs to choose from.

James likes strange sweets, especially retro ones, so I popped into another discount store and picked up a Wham Rocket for 25p. No idea what it tastes like, but with a name like Wham Rocket it can’t be bad, right? All in all, I spent £3.25, so about 4p over budget.

On the surface my gifts for Laura look terrible. I got her a bag of sprouts (£1), some risotto rice (£1), lentils (£1) and a tin of peas (21p). There is a story behind these gifts though. In the office last week Laura declared that sprouts were “her favourite thing about Christmas”, which is pretty tragic to me but it means I’ve been able to get her something she really likes.

Laura’s also mentioned how she’s been the department’s “lentil correspondent” because her recipes often contain them. I recently made some unkind remarks about her risotto recipe that featured in our recent Tasty meals for a pound article. So in buying these gifts I was trying to say how I want Laura to enjoy her favourite foods, even if I think they’re a bit odd.

As you can see, buying thoughtful and useful presents on a strict budget can be very hard! But with some imagination it’s possible to make your gifts more meaningful than the few pounds they cost to buy.

Getting involved in this secret Santa has taught us that the amount of consideration given to a present is often a lot more important that the amount of money spent. Don’t get me wrong, an Xbox or a mountain bike might have been fun but surely the true meaning of Christmas is knowing that you’ve got people close to you that really understand what you like and can make you happy with just £3.21.

10 top tips for moving into your first home

In June this year I took the plunge and moved in with...

Are these energy-saving myths costing you money?

Myths and rumours are funny things. Back in school, there were always...

We've argued whether the internet is good at saving you money, but...