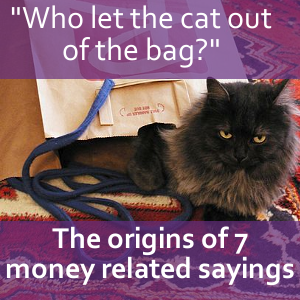 This is a guest post from Mark Swain, one of our debt advisors. Mark has worked at StepChange Debt Charity for just over a year and this is his second blogpost for MoneyAware. Take it away Mark…

Money is an important part of our daily lives and has been for centuries. It has also influenced our language and introduced many sayings and phrases.

When you think about it sayings are funny old things. Have you said something like ‘oh that’s let the cat out of the bag’ and wondered why you’ve said it? Well wonder no more, as I walk you through the origins of seven money related sayings.

In earlier times, the documents dealing with government income and expenditure were carried in a leather bag. An early French word for such a bag is bougette. In time the bag lent its name to its contents, and Chancellors of the Exchequer have been delivering budgets ever since.

Eventually the word budget became used for a general household income and expenditure. Here at StepChange Debt Charity we encourage everyone to be like the French politicians of old and complete a budget. You can use our Debt Remedy tool to help you.

This is such a familiar word that its origin, from the Latin word calculi (meaning pebbles), comes as a quite a surprise. The Romans used small balls called calculi in their board abacuses on which they performed their mathematical calculations.

Only when the results had been worked out were they written down in Roman numerals. So the process of using the pebbles to find the answer developed into the process we know as ‘calculation’.

Although this doesn’t particularly sound like a money related saying at first glance it actually relates to wages. This phrase comes from the Romans (yes those Romans again). In ancient times Roman soldiers were paid ‘salt rations’ as part of their wages so if a solider was under performing he would be classed as being ‘not worth his salt’ (although the popular TV programme Q.I. recently said this was a myth!)

As an interesting side note the Latin word salarium, from which comes our word salary, means salt.

‘Forking out’ means paying out money. In this context ‘fork’ has nothing to do with a garden implement or even a piece of cutlery; here it’s used as slang term for a finger which appears to long since fallen out of regular use. Despite this the phrase ‘forking out’ meaning to hand over money remains.

5. ‘Paying through the nose’

There are various theories to explain the origin of this expression which describes anyone forced to pay more for something than it is really worth. One explanation linked to a form of early taxation imposed by Danish invaders, who punished those who refused to pay by slitting their noses.

Fortunately your creditors are not crazy Danish invaders and don’t have the power to slit your nose. You can find out what they can actually do by checking out this article what can your creditors do?

‘Umpteen’ is a very large, though unspecified number, which is of fairly recent origin. Dating from the First World War it first was coined by army signallers. ‘Umpty’ was signallers slang for a dash in Morse code, so a great many dashes became ‘umpteen’.

This has nothing to do with money but you have been wondering about its origins from the beginning of this post haven’t you? It basically means letting out a secret and originates from medieval times when a cat would be placed in a bag by an unscrupulous market trader hoping to pass it off as a pig.

Unwitting buyers would pay for a pig in one of the sacks only to later find it was a cat instead. Those who had the good sense to check the bag before paying would literally let the cat of the bag. So I guess it does relate to money, well sort of.

Posted by Mark Swain in Budgeting

5 great reasons to get out of debt

Nobody likes debt, but sometimes we need a bit more encouragement to...

How to make extra cash – money wisdom from the web

Everybody likes earning extra cash, and if you can earn it around...

If energy prices continue to rise, the fuel poverty shortfall will continue...