A traditional Christmas dinner for a fiver 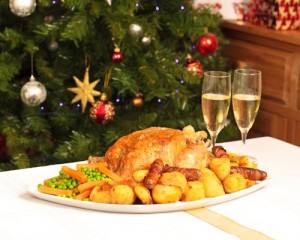 Although Christmas is a magical time of year there’s a lot of pressure on everyone at Christmas to spend beyond their means. Retailers and their marketers and  advertisers go into overdrive in a desperate attempt to part as many people from their cash as possible.

The Christmas meal is a big thing for everyone, whether you’re on your own or feeding the whole family. The good news is that it doesn’t need to be an expensive affair. You easily do a Christmas meal for a family of four for around £20 in total. That’s around £5 per person!

Okay, so we want a starter, a main Christmas meal, some dessert and a bottle of wine to wash it down with. Can this really be done for around £20 and serve four people? The honest answer is, yes, quite easily.

The starter for four

Soup sir? Freshly made soup is always great as a winter warmer. Butternut squash soup is delicious and you can make enough to feed four people (and have some left over) for under £3.

The ingredients: Butternut squash (1kg) 95p, onion 17p, fresh thyme (31g) 70p, and add some toasted croutons by shallow-frying some stale bread. This is a fresh and creamy start to your meal and soup is simple to prepare.

The main course for four

Yummy, turkey and all the trimmings! The first question to ask yourself, especially if you’re entertaining yourself and not a larger family is: Do you need to buy a whole turkey? You can get a turkey joint from most supermarkets for £5 to £6.

For a larger family you can pick up small or mini turkey for under £10. Check around the supermarkets as some even come with sage and onion stuffing stuffed into the deal as well.

Remember that the leftover turkey can be served cold on Christmas night, or on Boxing Day. And don’t forget that staple post-Christmas meal, turkey curry.

You can get a cranberry sauce for under £1 from most supermarkets, and if you’re partial to bread sauce, you can get a mix from as little as 30p from Tesco. Gravy mix can also be as cheap as a £1 (again check your cupboards first), or make your own gravy from a stock cube.

Get stuffed, it’s as cheap as chipolatas!

Stuffing can also be picked up for under a £1. It’s so cheap I’d recommend getting two packets, but that’s because I love sage and onion stuffing! Have a go at making stuffing balls for those who can’t get enough.

Chipolatas are popular at Christmas and go well with turkey. You can pick up a selection of these for less than £2 in most supermarkets. You can even spend a little more and go up to £3 for some gourmet ones.

I’m from Yorkshire, so I love Yorkshire puds. You can pick up 8 ready baked puds for under a £1 or make your own if you’ve got the ingredients in. They’re easy to cook and smothered in gravy they’ll go down a treat!

Spuds! You can get enough spuds for four people for under a £1 but if you want the popular Goose fat spuds the best place to look is Aldi and Lidl where you can pick up a bag for under £1.50.

If you want to play the Russian roulette with Brussels sprouts I’ll leave that up to you, just beware of elderly relatives later in the afternoon. You can pick up some sprouts from the likes of Aldi for less than 50p. Make sure children eat every single sprout on their plate. It’s character building.

Carrots are also cheap at most supermarkets, buying them loose is a good idea also, and you can do the same with the parsnips which are delicious when roasted (I put horseradish on mine).

Pie eyed on booze and puddings

The cheapest Christmas puddings can be picked up for as little as £1; the Tesco value version is a bargain at 98p! And mince pies can also be found for less than a £1 for six. Don’t worry about thinking they’re cheap – these pies feature surprisingly high in taste tests.

And finally to wash all this down, get a decent bottle of red or white wine for around £5 (don’t forget to be drinkaware).

PS. Let us know if you can do it cheaper and leave a comment below.

Prices listed in the article were commonly found in retail stores at the time of publication.

Posted by Matthew in Saving money

Worried you might be falling into ‘The Debt Trap’?

Our latest report, carried out alongside The Children’s Society, reveals that two...

5 MoneySavingExpert.com challenges that could change your spending habits for good

Living on a budget isn’t easy at the best of times, and sticking...

What happens to my debts if I die?

It's human nature to bury your head in the sand when it...